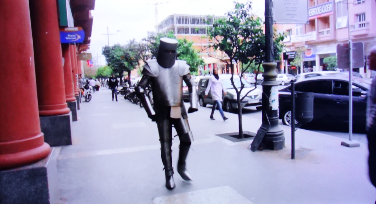 The Naked has arrived in Marrakech and has installed the first part of The Naked presentation. Aim is to present our local view on contemporary art next to that of what’s on offer at the Marrakech Biennial and to make that the starting point of a continuous dialogue in which we not only present our view but also invite others to respond, both verbally as well as visually and conceptually.

In practise it means we have set up three presentations at the location of The Marrakech Biennial in the Bank Al Maghrib at Jemaa El Fna. Curator and member of The Naked Johan Gustavsson initially selected works by Finnish artist Erkka Nissinen, Dutch Artists Ton Schuttelaar and by Israeli (but New York based) artist Tamy Ben Tor.

These artists one way or the other play a role in our local and national art world in The Hague, where we are based, and in The Netherlands as a whole. We have also brought many more works by artist from The Hague and Holland so that we can continuously change what’s on display. Contributors from all over the world that have written articles for thenaked.nl have also been invited to send works to Marrakesh and that will give us the initial ‘lugage’ for our trip around the world in Marrakesh.

In a way we consider our contribution to the biennial as the setup of a new artist run space.

Where an artist run space is the coming together of different minded individuals with their own ideas and inspirations that during a process of making exhibitions together have to find a common ground, we have invited different cultures and nationalities to the table. As the time space and possibilities of the biennial are limited we do not have the ambition to fully succeed, but we look for that what we can learn from each other and the different perspectives provided during the process. 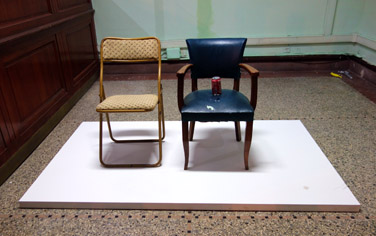 The work presented of The Hague based artist Ton Schuttelaar consists of two chairs on a low pedestal with an empty coke can on one of them. Ton Schuttelaar provided us with an description of the components of his installation. He did not come to Marrakesh to select them or to install them himself.

Between 2005 and 2011 he created a private archive of photographs that for him work as something he describes as ‘a methaphor for the recent collective modern-art archive’. These photographs were the basis for installations in which he created visual translations of the pictured objects on the original photographs.

As no new additions to his archive were possible after 2011 the necessity arose to study the reusage of elements. The option he’s studying right now is exchangeabilty. Of course you can change always one object for an other object but this refers to the endless line of massproduction or variety. He is not looking for that because in the end the chosen object becomes important and iconografic again. To solve this problemhe thought of the idea of Ultra Things (Ultra Things have to be world wide spread, very easy to get hands on and they have to be around already for some time and will be in the future. And finally they need to be neutral in shape), that can change into other Ultra Things without changing the idea of the original installation.

Till now he found about 10 Ultra Things he can use. For him these Ultra Things offer the possibility to be ultra modern. With the attempt of being ultra modern he attempts to overthink possible new ways of dealing with the object and making art after the collapse of innovation as censorship within the arts.

In this case his original photograph has been translated into the installation using chairs from the location in Marrakesh and a Moroccan can of coke.

In the centre of the bank Marrakesh Bienial curator Hicham Khalidi placed a work by Belgium artist Éric ten Hove. This artist worked together with local artisans to produce a lifelike copy of a Mercedes engine. 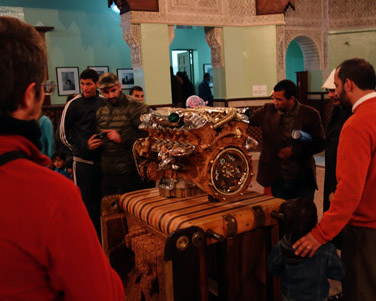 The use of authentic materials and handcrafted skills in combination with a detailed car engine awes the audience of the biennial and local visitors appreciate both the sculpture as well as the skills needed to produce the work.

The same visitors pay very little attention to the work of Ton Schuttelaar. They do not only walk past, they also remove the chairs from the pedestal so they can sit down while they admire the craftmanship in the work of Ten Hove.

The coke can has been replaced several times as visitors and cleaners assumed it was not part of the artwork.

The coke can was stuck to the chair with thick tape and the work got sudden attention when the can fell over revealing the tape. Suddenly visitors got their cameras out to take pictures of the oddly wrapped glued plastic shape which slightly resembled a face.

It’s needless to say that the work taken out of the dutch context lost it’s importance. Admitatly Ton Schuttelaars work sometimes receives similar reactions by the general audience in Holland but I also do not assume many of the professional visitors of the biennial felt the significance of the work either.

That would probably have been different if these professionals would have experienced the work in a Dutch setting in a a typical western white cube kind of presentation. 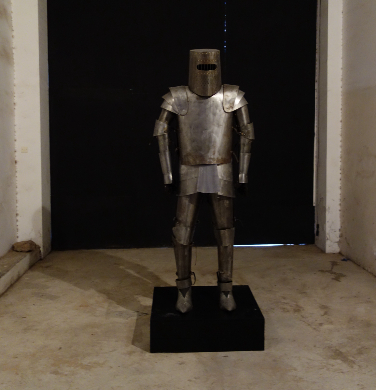 At another location of the bienial L’Blassa we came across the work of Simohammed Fettaka. A self made knights armor was presented to us. It wasn’t as skillfully produced as the Mercedes engine of Ten Hove. Metal plates were clumsely attached together forming a metal suit that clearly represented a classical Ivanhoe type of armor. 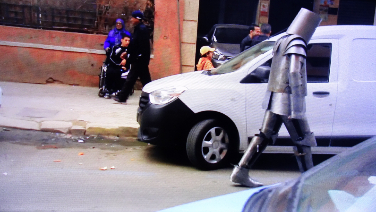 Next to the armor was a video showing the artist walking through Marrakesh while being followed by local kids who constantly took pictures of the bizarre performance.

We all liked the piece. The armor at first did not impress but the combination of the armor with the video made us discuss the work at length.

We ended up with the main question: would we also have appreciated the work if it had been set in Amsterdam. Did the combination of craftsmanship and exoticism of Marrakech make us milder in our judgement as some of us assumed that a translation of the work to our local environment would have communicated as an unfunny gimmick.

Possibly we liked it due to the contrast between the western based knight and the Arabic rural environment. We saw a participant of the crusades willing to proclaim his god over that of Allah, but lost from the holy lands and ended up in Marrakech where Marrocan youths didn’t feel threatened by the cumbersome armor.

In Amsterdam we would have simply assumed this was someone about to be married, stupid enough to have his friends dressing him up in a funny costume for his stag night.

On Sunday we have to opportunity to find out how biennial curator Hicham Khalidi and our colleagues of several Marrakesh run spaces feel about our first encounters as we have organised a public discussion on the different local perspectives on developments in the global art world.

It’s 13.00 hours in Bank Al Maghrib at Jemaa El Fna for those who are interested.

(This article is also published on www.thenaked.nl where more will follow concerning the Marrakesh bienial and the explorations of The Naked)